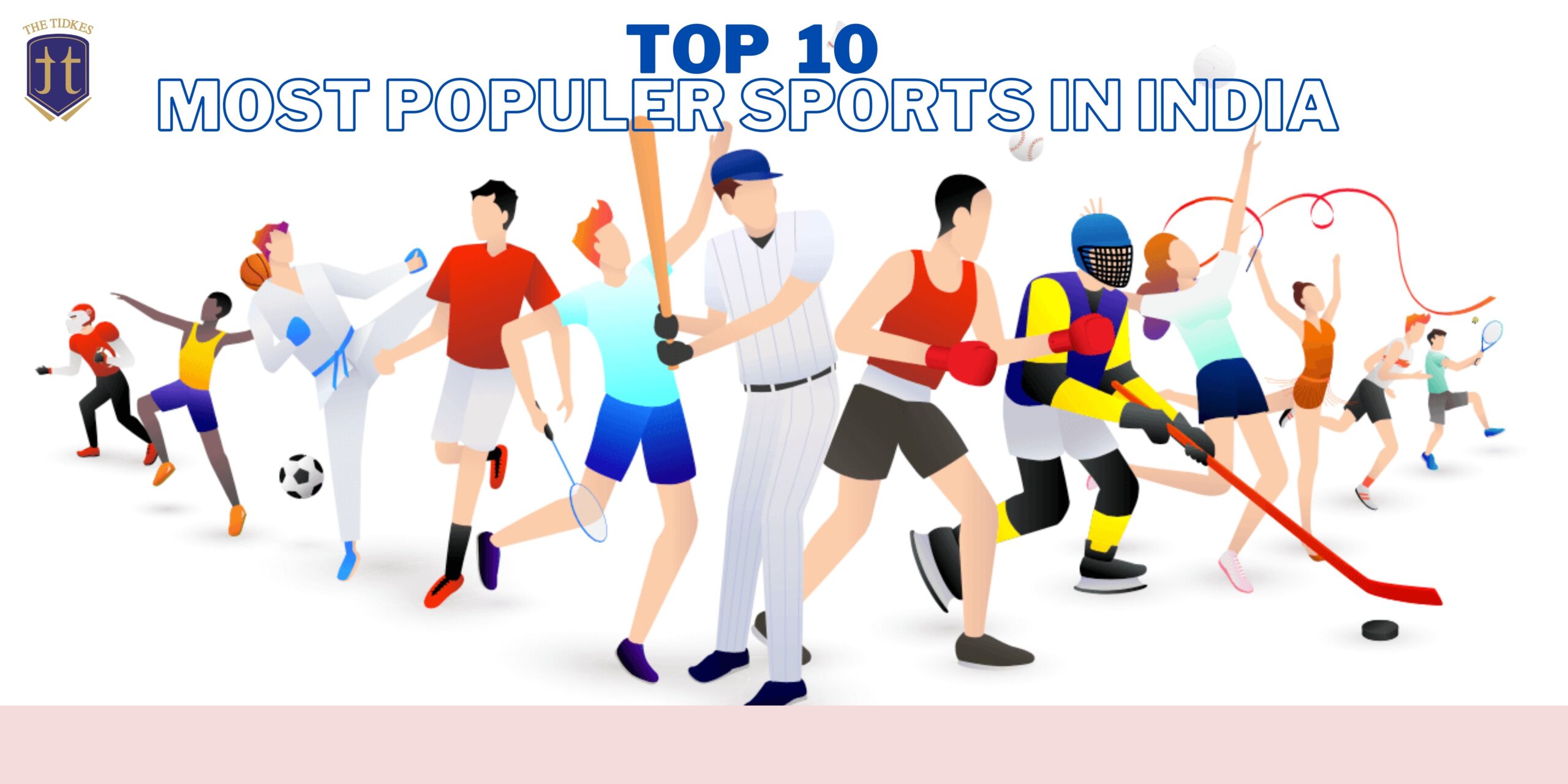 Sports has always been a part of Indian culture. It has been an important aspect of the socio-economic development of any country. Sports enhances the overall health and fitness of the people, inculcates discipline, healthy lifestyle and improve relationships between people and countries.  Hence sports play an important role not only in the life of the players but all the people associated with it. It brings communities together and nations together. It enhances tourism and helps in bringing revenue when countries host different games. The manufacture and sale of sports goods also get a shot in the arm. Some sports have their origin in India and are also played in India. Some of them are famous in certain states of India, whereas some are played at the national level and international level.

Cricket is the most popular game in India. It is followed by millions in almost every part of India and by Indians, the world over. The craze for the ‘Gentleman’s game’ knows no boundary. People sincerely and earnestly follow it like a religion and the legends of the game is considered demi-gods. India enjoys a vast viewership and audience in every cricket playing country. So a huge amount of money is poured in, in the form of sponsorship, advertisements, telecast rights and prize money. To satisfy the people’s growing interest, passion and enthusiasm in the game, we have league cricket. You will find children, youngsters and even adults playing cricket in available open space, by-lanes of cities and towns, streets and space between buildings and houses. Gully cricket and box cricket are names given to cricket played in by-lanes. The rules of the game is also modified to keep up with these changes. Space constrain is not a deterrence to the fanatics of the game. Children play cricket with rubber balls or tennis balls. India has hosted the World Cup in different formats of cricket a number of times.  And this has only fueled the popularity of cricket manyfold.

Football is a very popular sport in India but only after cricket. In 2017 India hosted FIFA U-17 World Cup and in 2022, India will be hosting FIFA U-!7 Women’s World Cup. There is a lot of developments at the grass root levels after the visits of officials of the foreign leagues. With the top-level leagues like ISL bringing in more glamorous and popular international football players, there has been a steady rise in football popularity in India.

In India hockey is synonymous with Dhyan Chand. He is called the father of hockey as well as the magician or wizard of hockey. Hockey is the national game of India and an Olympic sport as well. But good infrastructure, promoters and sponsorship can do wonders to the game’s popularity.  Moreover, there is less media coverage of the game because hockey is not played frequently at national and international levels.

Kabaddi is a sport that originated in India. It is the national sport of Bangladesh. It is mainly played by the people in the villages. It is played between two teams of seven players each. Kabaddi is rising fast in popularity and viewership to take the second position in Indian sports. Its popularity is increasing year after year to become the second most-watched sport in India, after the launch of Pro Kabaddi League in the year 2014.

This game originated in the city of Pune in India and was initially called ‘Poona’. The sport was played by the British officers in then ‘Poona’ and later on took it to Britain. The sport was played in a place called Badminton House in Britain.so got its name from here. Badminton stands as the second most watched sport in the world. It is more popular in the Asian countries. Many people in Asia grew up playing this sport. It’s a fast sport, requiring a great amount of physical fitness, stamina and agility. It can be easily picked up by a beginner. It can be played on any field. It is played with a racquet and a shuttlecock which are not very expensive. India conducts many domestic tournaments to encourage more players to take up the game at the national and international level.

The game of Chess originated in India around the 8th century. It’s an old royal game called chatrang in India. Chess is an acronym for Chariot, Horse, Elephant and Soldiers. It evolved over a period of time and the modern version of the game emerged from Europe. Today chess is one of the most popular game played by millions worldwide. It is a board game that is played between two players. At the beginning of the game there are 32 pieces, 16 black and 16 white. It involves moving the six chessman on the chessboard to play the game. For doing that you have to learn the moves of the six pieces. You also need to learn the rules of attacking and defending the King including castling.

Wrestling is one of the oldest sport in India. It began centuries ago. A wrestling bout is a physical competition between two competitors who try to gain and maintain superior position. There are three type of wrestling; Greco-roman style, freestyle and folkstyle. Arms legs, feet are used to overcome an opponent and for tripping and tackling. In folkstyle, wrestling scores are for pinning the opponent and changes in control. The rules must be followed to win a match. These rules include takedown, nearfall, escape and reversal.

Tennis has a massive viewership worldwide and considered as a very popular sport in the individual format and as a team sport. It is very popular in India as well but only in the urban part of the country. Tennis which is considered as a rich man’s sport is gaining popularity in India. It’s an expensive sport and like football and cricket, it cannot be practiced on the fields or streets. Further, it required high levels of fitness, stamina, practice and availability of tennis courts. We have few star players who have made their mark in this sport and brought Indian tennis to the international stage. This has surged the interest in this sport many times.

Volleyball is a recreational sport and its popularity is rising in India, especially in south India. It was introduced in India by Y.M.C.A. in 1951. It is played by two teams that has six players each. Many competitions are held at the national level. India has received many laurels in volleyball at the international level as well.  With more and more youngsters taking to volleyball and with many promoters promoting the game in states like Kerala India could become a major market for this sport. Lack of sponsors, poor media coverage and poor marketing has resulted in crippling Indian

Basketball is a very popular game played all over the world especially more in the United States where it was invented. In India it is popular among the student community. Most of the schools and colleges have basketball court. Many competitions are held at inter-school and inter-college level, throughout the year for the students. This has helped to spread the popularity of the game among students. Indian basketball has championships throughout the year. This has produced many talents players who have brought trophies and medals to India.

So be a sports enthusiast and encourage friends and family members to take up some sport of their choice. All sports goods related to cricket, badminton, football, basketball, volleyball, gym equipment etc. are available at our ecommerce platform www.thetidkes.com . Carom boards, chess boards, yoga mats and skipping ropes are also available with ‘THE TIDKES’. Do visit our retail store, TT SPORTS, at Akola, Maharashtra to find a wide range of sports products and accessories. We are authorized distributors of Cosco, Yonex, Nivia, Spartan, SS, Tennex, Konex and many more Indian and global brands.